The first sessions of the council until the arrival of Emperor Constantine condemned the Arian heresy and enshrined the Catholic teaching about the Son of God in those words which we still sing in the creed today: ‘homo-ousion toi Patri’, ‘consubstantialem Patri’, or ‘con-substantial with the Father’, dependent on your preference for the Greek, Latin or English tongue.

We had left the synod at the point of the composition of the creed and have returned a little too late as the bishops, on our arrival, were at a hearty banquet with the emperor, celebrating his recent triumph over Licinius, emperor of the East and persecutor of the Christians. A certain deacon is in sight and having little to do other than hold firmly his bishop’s mitre, he is willing to tell us what had transpired in our time away from the synod.

“It was surprising to see”, he begins, “bishops a moment before united against Arius, a little after split into sides when the matter of the Easter Controversy was brought up.”

“One of the bishops from a western see related his experience in a visit to the east around Easter some couple of years ago. He had celebrated Easter in Rome before setting out for a see in Asia Minor. Arriving some days later with all the euphoria of the Great Feast, he was dismayed to find the Christians of that province still observing the fast of the Great Lent.”

“He went on to point out the practice in Rome and the decrees of a Roman synod held at Arles eleven years before this. Having received news of the no small dissension arising because of Christians celebrating Easter on different dates; dissension which brought ridicule upon the name of Christian in heathen circles, the council decreed that Easter was from thence to be celebrated on the same day, at the same time in all the world”

“According to that bishop, the common practice, especially among the Westerns, was based on an eighty-four-year cycle of calculations drawn up by a certain martyr, Hippolytus. Hippolytus, he said, gave the following rules for computing the date of Easter:

“‘But do not our most skilled astronomers fix the date for the vernal equinox for March 21?”, a bishop, probably Alexandrian, muttered from one side.'”

“‘Agreed. Christ died on a Friday and rose on the Sunday after. But it was Friday because it was the 14 Nisan in the calendar of the Jews, the date of the Passover as written in the Law, the very Scriptures in our midst have this date inscribed in one of its holy parchments’, said another bishop. He neither agreed with the first nor with the mutterings of the latter. This bishop, later identifying himself as the bishop of Smyrna, went on to tell how his practice of celebrating Easter following the date of the Jewish Passover (i.e. 14 Nisan in the Jewish Calendar) whatever day of the week it fell, was handed over to him by the Blessed Polycarp, his predecessor of holy memory, a disciple of St. John the beloved of our Lord.”

“The Romans claimed their practice of following the day of the week and not the day of the month or year was handed down by the Apostles, Ss. Peter and Paul. The bishop of Smyrna added the authority of St. Philip to that of the Evangelist as the source of the practice in his diocese and neighboring dioceses of Asia Minor”

“It was not a matter of dispute which Apostle was greater, but in a matter of discipline, it was no small contest to settle as both sides laid hold of an Apostle for his authority”, the deacon continued, “The Easterners who celebrated according to the Jewish Passover were already called Quartodecimans by the Westerners”.

“Someone, I do not now remember, but he certainly was not a bishop, raised an argument against the practice of following the Jews in the determination of the Easter date. His argument was based on the impiety of the Jews in the crucifixion of our Lord, and the abolishment of the Mosaic Law by the Christian Law, ‘except’, he said, ‘we have amongst us Judaizers'”

At long last, the council settled the matter in a most amicable manner. The Alexandrians were famous for their knowledge of the motions of the heavenly bodies. They were unrivaled. The council agreed, after listening to the Bishop of Alexandria share the practice in his see concerning the date of Easter, on the following points:

The deacon, willing to share his reservations on the proceedings, is summoned by his bishop whose grey hairs surrounding a bald center stood in need of the mitre he was holding.

The council in its encyclical letter, which has come down to us happily wrote:

“We give you good news of the unity which has been established respecting the Holy Passover. In fact, according to your desire, we have happily elucidated this business. All the brethren in the East who formerly celebrated Easter with the Jews, will henceforth keep it at the same time as the Romans, with us, and with all those who from ancient times have celebrated the feast at the same time with us.”

If you’re interested in the argument against following the Jewish practice, the Emperor himself left us the arguments in his own letter after the council, a letter he addressed to the bishops of the East, as follows:

“When the question relative to the sacred festival of Easter arose, it was universally thought that it would be convenient that all should keep the feast on one day; for what could be more beautiful and more desirable, than to see this festival, through which we receive the hope of immortality, celebrated by all with one accord, and in the same manner? It was declared to be particularly unworthy for this, the holiest of all festivals, to follow the custom (the calculation) of the Jews, who had soiled their hands with the most fearful of crimes, and whose minds were blinded. In rejecting their custom, we may transmit to our descendants the legitimate mode of celebrating Easter, which we have observed from the time of the Savior’s Passion to the present day (according to the day of the week). We ought not therefore to have anything in common with the Jews, for the Savior has shown us another way: our worship follows a more legitimate and more convenient course (the order of the days of the week); and consequently, in unanimously adopting this mode, we desire, dearest brethren, to separate ourselves from the detestable company of the Jews, for it is truly shameful for us to hear them boast that without their direction we could not keep this feast. How can they be in the right, — they who, after the death of the Savior, have no longer been led by reason, but by wild violence, as their delusion may urge them? They do not possess the truth in this Easter question; for, in their blindness and repugnance to all improvements, they frequently celebrate two Passovers in the same year. We could not imitate those who are openly in error. How, then, could we follow these Jews, who are most certainly blinded by error? for to celebrate the Passover twice in one year is totally inadmissible. But even if this were not so, it would still be your duty not to tarnish your soul by communications with such wicked people (the Jews). Besides, consider well, that in such an important matter, and on a subject of such great solemnity, there ought not to be any division. Our Savior has left us only one festal day of our redemption, that is to say, of His holy passion, and He desired (to establish) only one Catholic Church. Think, then, how unseemly it is, that on the same day some should be fasting, whilst others are seated at a banquet; and that after Easter, some should be rejoicing at feasts, whilst others are still observing a strict fast For this reason, Divine Providence wills that this custom should be rectified and regulated in a uniform way; and every one, I hope, will agree upon this point. As, on the one hand, it is our duty not to have anything in common with the murderers of our Lord, and as, on the other, the custom now followed by the Churches of the West, of the South, and of the North, and by some of those of the East, is the most acceptable, it has appeared good to all, and I have been guarantee for your consent, that you would accept it with joy, as it is followed at Rome, in Africa, in all Italy, Egypt, Spain, Gaul, Britain, Libya, in all Achaia, and in the dioceses of Asia, of Pontus, and Cilicia. You should consider not only that the number of churches in these provinces make a majority, but also that it is right to demand what our reason approves, and that we should have nothing in common with the Jews. To sum up in few words: by the unanimous judgment of all, it has been decided that the most holy festival of Easter should be everywhere celebrated on one and the same day, and it is not seemly that in so holy a thing there should be any division. As this is the state of the case, accept joyfully the divine favor, and this truly divine command; for all which takes place in assemblies of the bishops ought to be regarded as proceeding from the will of God. Make known to your brethren what has been decreed, keep this most holy day according to the prescribed mode; we can thus celebrate this holy Easter day at the same time, if it is granted me, as I desire, to unite myself with you; we can rejoice together, seeing that the divine power has made use of our instrumentality for destroying the evil designs of the devil, and thus causing faith, peace, and unity to flourish amongst us. May God graciously protect you, my beloved brethren.”

The Easter Controversy for many reasons did not cease after the council, at least not until the sixth century when a certain Abbot, Dionysius Exiguus (Dennis the Little), gave to the Romans a date of Easter tables following a nineteen-year cycle and more in sync with the Alexandrian table.

How is Easter Calculated today?

“Easter is to be celebrated on the first Sunday after the Paschal Full Moon date of the year”
The Paschal Full Moon is sometime after March 21 (the date the sun crosses the equator in the northern hemisphere). There is some complicated astronomical mathematics used in deriving the rising of this moon.
No. There’s no telescopic bishop with eyes perpetually stuck into a Galileo’s device watching for the rise of some full moon that looks like Easter. No. The dates are mathematical calculations which are close approximations of the actual celestial motions.

It is pleasing to know that for us here in the West, Easter will never fall before March 22, nor after April 25.
This year, Easter is April 21! 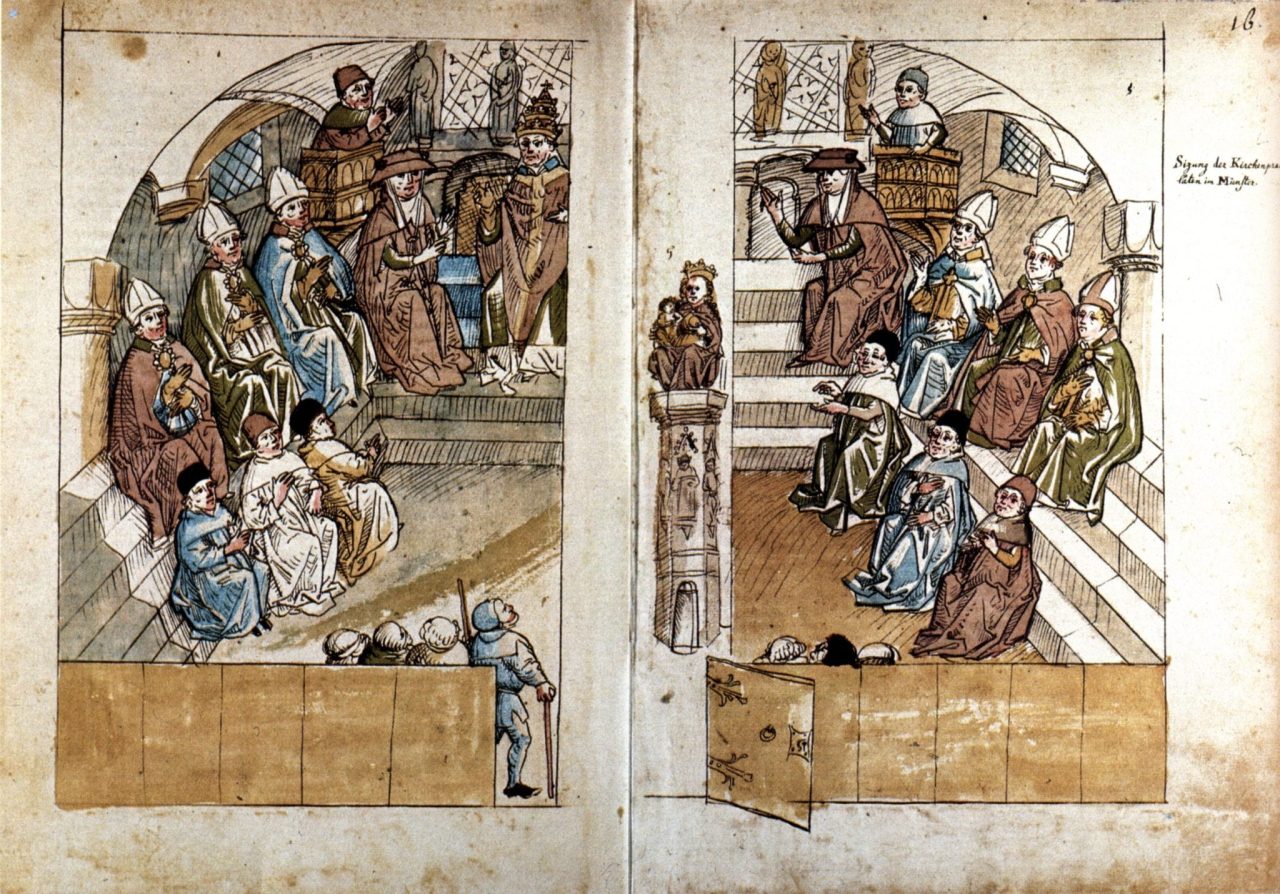